Brenda Jordan, Class of 1960, will be Inducted into the Staten Island Sports Hall of Fame 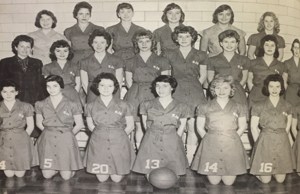 During her four years at Saint Joseph Hill Academy, Brenda was on the Varsity Basketball Team, serving as team captain her senior year.  Overall, she played 46 games, averaging 26 points per game.  Brenda was the first known female to break the 1,000-point barrier.  She finished her high school career scoring an incredible 1,180 points. In the photo above, Brenda Jordan, right, drives to the hoop in a game during the 1959-60 season.

When she wasn’t on the court, Brenda spent her time on the baseball diamond where she pitched and played shortstop on the boys’ sandlot teams.  According to Jerry Lee of the Staten Island Advance, “She was clearly one of the first pioneers and arguably the most outstanding talent in the late 1950s.”