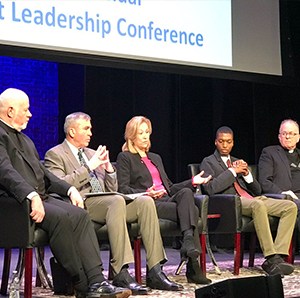 The Second Annual Student Leadership Summit was hosted by the Archdiocese of New York at The Sheen Center for Thought and Culture in Manhattan.  The topic was Civic Engagement and specifically, how teenagers can get involved in politics and government using their Catholic faith as a basis for their decisions.

Junior and Vice President of Student Council Athina Sonitis realized there is a lot of power in being a teenager, even if she is not able to vote yet: “Our generation can get involved by participating in protests, calling a local government official or even posting on social media to make the change they want to see in government or even in the world.” The panel included some very influential people, including Janet Petro, one of the first female attendees of the United States Military Academy at West Point and the Deputy Director at the Kennedy Space Center and retired Lieutenant General John Wissler, United States Marine Corps, who served for 39 years including as Special Assistant to President George Herbert Walker Bush. Junior Grade Level Representative Madison Gorman addresses the Panel and the crowd with her views on lowering the voting age from 18 to 16 years old.

Junior Larissa Guida spoke of the opportunity to attend the conference with these remarks: “I was inspired by Lieutenant General John Wissler who shared that even through the physically and mentally taxing days while traveling country to country with his fellow Marines, he still found time to pray and connect with God.”